Free Angela Davis: How a 1970s black American civil rights advocate made the world fall in love with her
Boogaloo Boys: Meme warfare spilling onto the streets of America

Godzilla sandstorm heading for the US: the bad, the good and the pretty

A gigantic dust cloud from the Sahara is heading for the United States from the Caribbean. RTD explains what's unique about the "Godzilla" dust cloud and whether it's a good or a bad thing.

The Saharan Air Layer (SAL) is a regular visitor to the region. "This dry dust plume commonly forms from late spring through early fall and moves into the tropical Atlantic Ocean every three to five days", quotes the Weather Channel.

"This stuff helps build up the beaches across the Caribbean", points out CNN meteorologist Derek Van Dam. "It even fertilises the soil across the Amazon".

The SAL generally floats between 1,500 m and 6,500 m above the Earth's surface. It is pushed West by the trade winds and tropical waves of the central and Western Atlantic ocean at altitudes from 2,000 to 4,500m. The Saharan dust cloud has turned off the party lights at Cancun in Mexico on 25 June 2020/ Credit Reuters Jorge Delgado.

The cloud to beat all clouds

The Saharan Air Layer left the African coast on June 14. It entered the Gulf of Mexico region of the USA, hitting Texas, Louisiana, Alabama and Florida on Thursday, June 25. Thicker dust should come at the weekend, spreading into North Carolina, Tennessee and maybe as far North as Ohio or even Michigan.

This cloud is big, really big. Astronauts from the International Space Station have published pictures of the SAL floating across the Atlantic. "On satellite images from space, dust typically appears somewhat subtle and faint, but this plume can be seen as clear as day", points out CBS News.

The station orbited above the shadow of the solar eclipse in Asia then the Saharan dust cloud over the Atlantic on June 21. https://t.co/qcHlvByj8M pic.twitter.com/npgL857jSC

It arrived in the Caribbean on 20-21 June and hit Jamaica, Puerto Rico and the US Virgin Islands on Monday, June 22.

The natural blue of the sky was absent in Jamaica today Monday, June 22, 2020. The Saharan dust has arrived. It is hard to see with the naked eye, but it is definitely here on the ground, and we are breathing it in. People with asthma or sinusitis issues should be cautious. pic.twitter.com/VaXhDVmOvn

In Puerto Rico, Godzilla broke all records. Visibility went down from 10 to 5 miles, and air quality became the worst since records began 15 years ago.

Can I just say, I´m Puertorican and I´ve lived in Puerto Rico my whole life. We´ve always had dust clouds from the Sahara but never in my life have I seen it as bad as I did this week. I don´t have health conditions and still was kinda afraid to go out and have to breathe that.

So how did this cloud get so big? The main culprit is weak winds over the Atlantic in June. Local weather storms in Africa caused the sand to rise. Instead of being transported across the ocean a little at a time, as usual, the lack of wind meant the dust built up in a holding pen until the winds picked up again, moving the particles in one go.

The 8th Saharan dust cloud of the year has been thick across the eastern and central Caribbean. Images are from yesterday and today in the Dominican Republic and Puerto Rico (including the rebuilt NEXRAD Doppler Radar in Cayey). The dust will reach South Florida this weekend. pic.twitter.com/jbEnDwPCbl

Extra air pollution in a time of COVID

One the one hand, the dust cloud could cause or worsen respiratory conditions. Indeed, it is made up of "dangerously high levels of fine particulate pollution".

"This is probably the worst air quality caused by Saharan dust in recent memory," according to AccuWeather Senior Meteorologist and lead hurricane expert Dan Kottlowski. "Dust particles are like any other pollution such as smoke. Low-level dust is usually a very short-term issue, such as when one experiences dust in a dust storm. But this is different because it's not local dust, it's dust that originated at least 4,000 miles away and has been falling out to the ground since then", he added.

"This is the most significant event in the past 50 years. Conditions are dangerous in many Caribbean islands," Pablo Méndez Lázaro, from the University of Puerto Rico's School of Public Health, explained to the Associated Press. 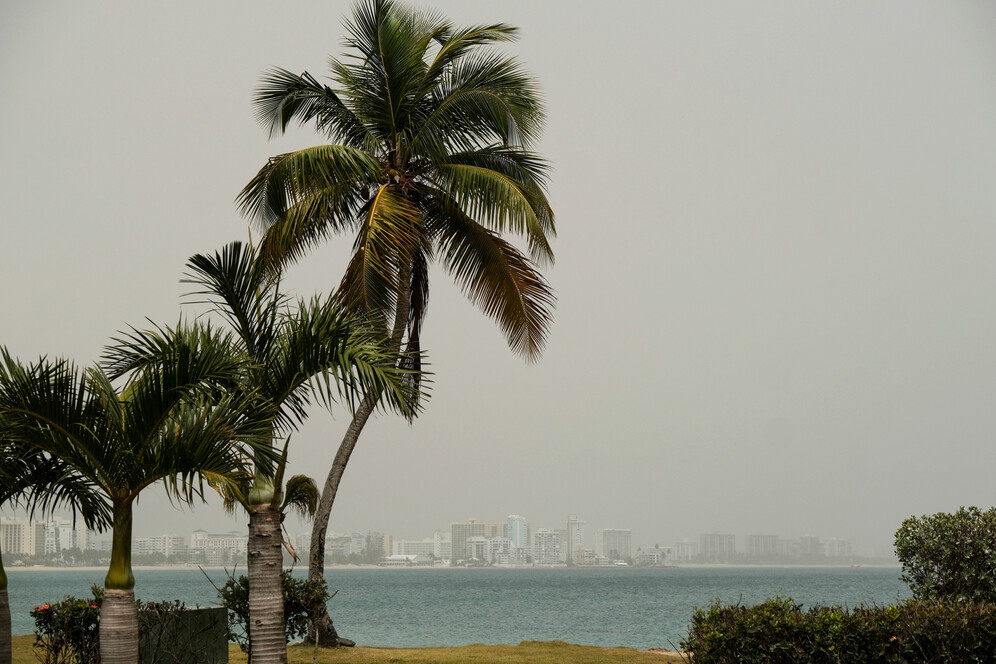 The United States shouldn't expect to get off scot-free, though. "Air pollution transport models are indicating the dust will still be very concentrated when it reaches the US, and many locations in Texas, Arkansas, and Louisiana likely will experience an AQI in the orange "Unhealthy for Sensitive Groups" or red "Unhealthy" range", according to Yale Climate Connexions.

The cloud has picked its moment, in the wake of the coronavirus pandemic. "Air pollution aggravates COVID-19 symptoms, leading to expected increases in hospital admissions from the disease in regions where dust concentrations spike."

However, it could be worse: "The good news with that is we're all wearing masks", University of Texas meteorology lecturer Troy Kimmel told the Augusta Chronicle.

On the other hand, the cloud is an effective defence against the scourge of the Caribbean: hurricanes.

"The early part of hurricane season is typically quiet in the tropical Atlantic. But this outbreak of dust along with unfavourable upper-level winds will likely put a lid on any significant tropical development in the near-term future", predicts Weather.com.

This is because the Saharan dust cloud produces dry and hot air. According to Jason Dunion, who studied the phenomenon as part of the NASA African Monsoon Multidisciplinary Analyses (NAMMA), "hurricanes don't like dry air in the middle parts of the atmosphere, and that's exactly what the Saharan Air Layer has. A Saharan dust storm also has a very strong surge of air embedded within it, called the mid-level easterly jet, that can rip a storm apart that's trying to develop. We call that vertical wind shear."

Hot air rises, but the air of the storm is cooler than the Saharan dust cloud above it, so it gets stopped in its tracks instead of causing a vortex. "The dry air can create downdrafts (sinking air) around tropical storms and hurricanes, which may result in the weakening of tropical cyclones", Jason Dunion explained.

The dust itself works against hurricane formation. Syed Ismail, a scientist at NASA Langley Research Center, added, "We think that dust aerosols can affect tropical disturbances, sometimes even kill those disturbances. Dust inhibits convection, the process of moisture rising to the higher levels of the atmosphere, and then precipitating as rain. So these Saharan dust layers seem to have a blanketing influence on the development of convection."

One nice touch of the Saharan dust cloud is the beautiful sunsets and sunrises it produces. "As the sun passes the curve of the earth, its rays shine through a thicker layer of atmosphere." explains the Augusta Chronicle. "Dust and water particles in the atmosphere are responsible for scattering sunlight, creating the rich colours of sunsets and sunrises. With the added dust in the atmosphere, a greater number of particles can refract sunlight into a beautiful range of purples, pinks, oranges and yellows."

Did you see today’s sunset??! @Dentonwx said we’d possibly be having beautiful sunsets thanks to the Saharan Dust Storm and boy was he right. WOW 😍😍😍 pic.twitter.com/AYPYPLVhN0

Trust the planet to make 2020 ever more exciting!