“People think boxing is just for men, but that's not the case”: Pakistani girls’ boxing club knocks out gender stereotypes
Was it all worth it for Nepal’s oldest schoolboy?

Can small-scale communism and polyamory cure the ills of global capitalism?

The downsides of the current world economic order are well-known: overconsumption of natural resources, inequality, alienation of disposable workers, loneliness. No wonder people are searching for an alternative model to global capitalist society. But what would that look like, and would anyone want to live there?

The answer to all these questions may come from the United States. There, the Twin Oaks Community has been testing a different way of life for the past 50-something years to find out whether it is possible to manage without your own money, car, home or pension. Can human beings remain motivated when private profit or property have been removed as incentives to work, self-govern or even in the area of romance? At Twin Oaks community, members get a chance to try their hand at all kinds of manual labour. © Twin Oaks Community

Twin Oaks intentional community was established in Louisa, rural Virginia, in 1967. It comprises 450 acres of farmland, a communal centre and several houses where 10 to 20 people each have their own bedrooms, but share living areas and meals. Two workshops where members produce handmade hammocks and tofu provide an income for the group.

The income-sharing community was initially organised along the principles developed by B.F. Skinner in his 1940s utopian novel ‘Walden Two’. The psychologist argued that organizing an environment along constantly-improved scientific lines would modify members’ behaviour to achieve a desirable society. Today, Twin Oaks retains a system where three planners serve as coordinators of the egalitarian community for staggered 18-month terms. Decision-making is guided by open discussion boards where members can cover all aspects of any question that comes up, as well as weekly members’ meetings.

Members commit to working 42 hours a week, generating income or performing domestic tasks from milking cows to childcare or cooking. Each area of work is organized by managers who have to stay within budget. Members get around $100 a month of spending money, but the community provides all necessities from meals to clothes, communal cars, home-schooling or elder care. Thus, members can go for days without handling money.

In recent years, around 85 adults and 15 children have lived there at any one time. To join, candidates must spend three weeks living on site, while both sides decide whether they are a good fit. Often, there is a waiting list, but, at time of writing, the community was advertising vacancies. 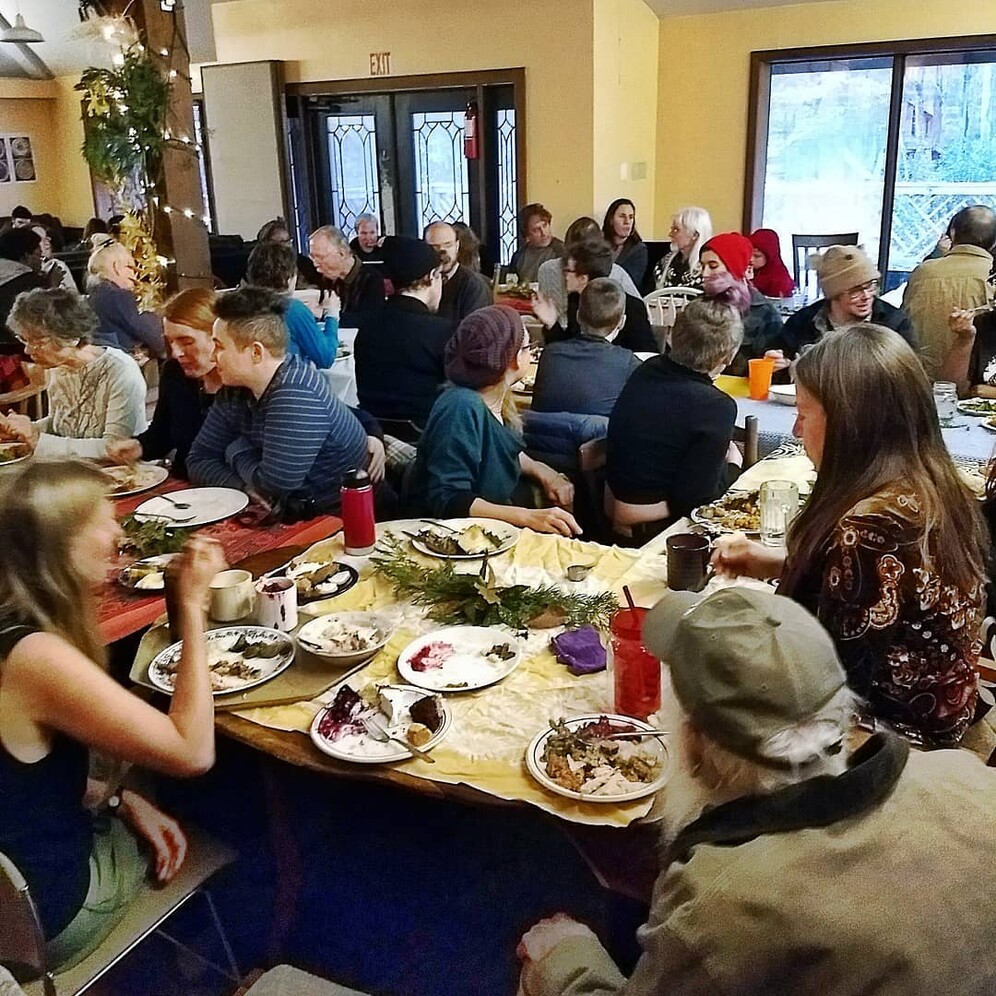 For Thanksgiving, some members go to visit their families, but those who stay at Twin Oaks don't need to be lonely, and have a choice of ethically raised turkey or the farm's very own tofu on the menu. © Twin Oaks Community

Twin Oaks does not promote any spiritual beliefs, so members can practice anything from Christianity to paganism, or advocate for atheism. “Our basic guiding principles are cooperation, egalitarianism, income-sharing, and non-violence,” claims its website. So, can a system which protects its members from want and loneliness in exchange for a bit of team spirit and a retreat from consumer society win against human possessiveness and ambition?

The answer, it appears, is mixed. The community itself has remained economically viable for decades. Orders are completed and customers are satisfied. Sharing resources means the community’s ecological footprint is sustainable, in stark contrast to average US consumption. Members are happy to escape from the relentless assault of advertising and consumerism. 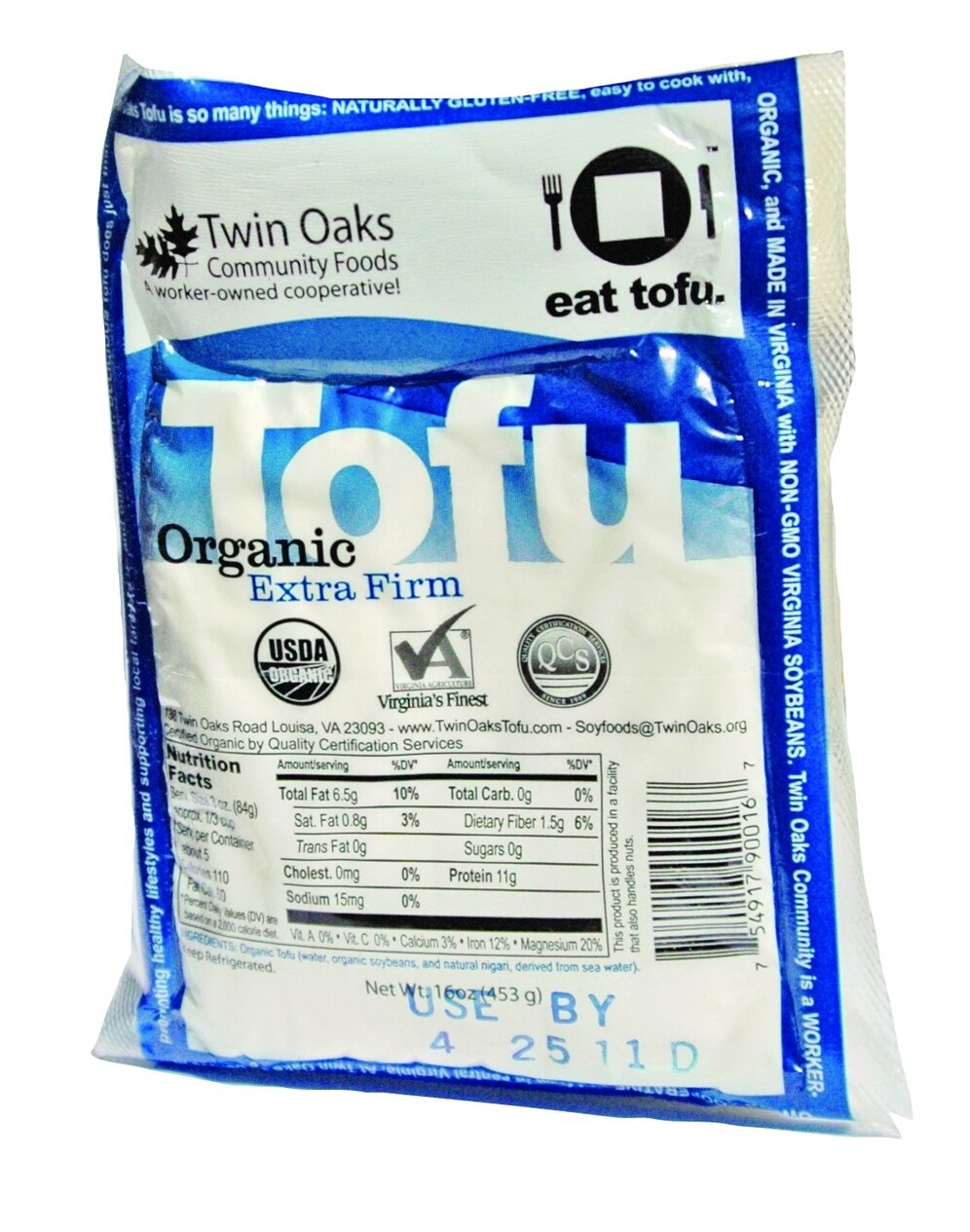 However, they can leave any time, and often do. Turnover can be as high as 25% in one year. “Sometimes the person wants to pursue a different life path (e.g. go back to school, travel, follow a certain career path). Sometimes the person has felt dissatisfied with their life for a while (like everyone does everywhere) and something happens to tip the scale for them to decide to leave (e.g. a relationship break-up, a difficult community issue, etc.)” the community website explains.

“Sometimes the person decides they want a different lifestyle than we live (e.g. private housing, more individual money, etc.) and so they pursue that elsewhere. On very very rare occasions we will ask a member to leave, if repeated instances of unacceptable behavior have occurred. (e.g. consistently not working enough, violent behavior, etc.)” it adds. The dream of staying at Twin Oaks to be cared for by the community in your old age is rarely realised, but during members’ time there, they do not build up any pension rights in the outside world. 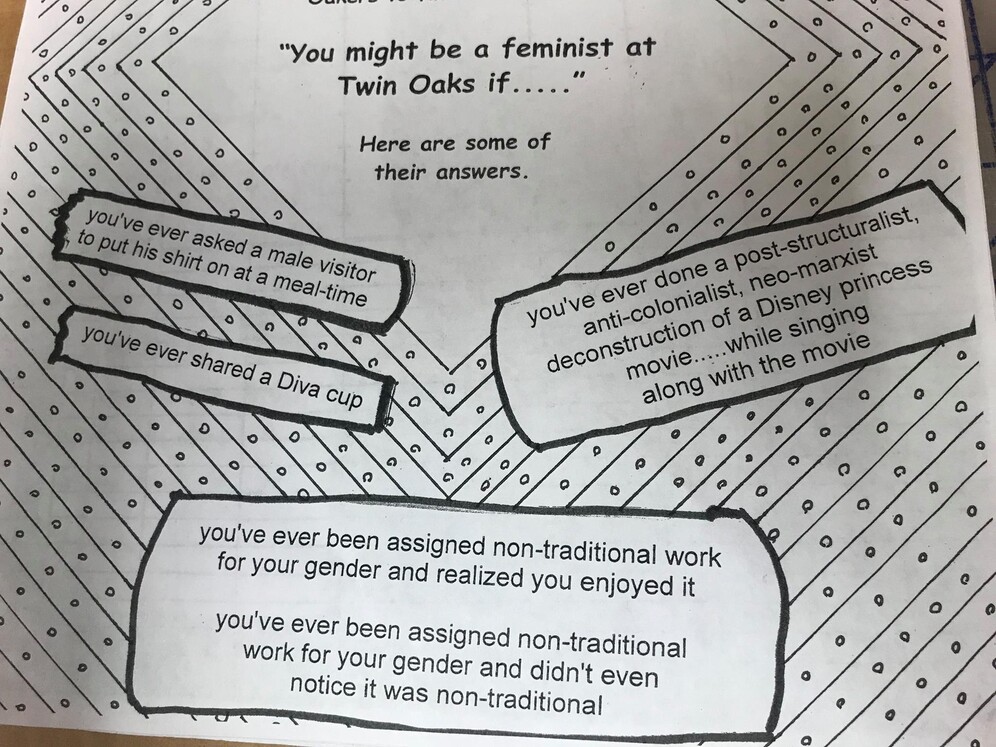 At Twin Oaks, all kinds of ideologies, gender identities and orientations are welcome. This fluidity leads quite a few members to change at least one of these during their time in the community. © Twin Oaks Community

Twin Oaks has avoided generating any kind of elite, according to Keenan Dakota. “Everybody here is expected to be responsible, and so we don't have a political elite,” the long-term member told RTD. “We keep everybody at the same economic level, so we don't have an economic elite and everybody has their own relationship to a greater power and so we don't have a religious elite.” However, the absence of perks for leaders has one downside. Few members want to be planners and it is difficult to persuade them to stick with the job for their full terms. Virtue is not sufficient reward for the headaches that go with leadership.

One aspect of life which generates mixed feelings is romance. Twin Oaks is famous for its acceptance of polyamory. When they join, individuals or couples may be trans and gay or straight, they may espouse monogamy, celibacy, or free love. “We attract all manner of exotic romantic relationship models, including a number which obviously won’t fly,” Paxus, a Twin Oaks member, confessed in a blog post. 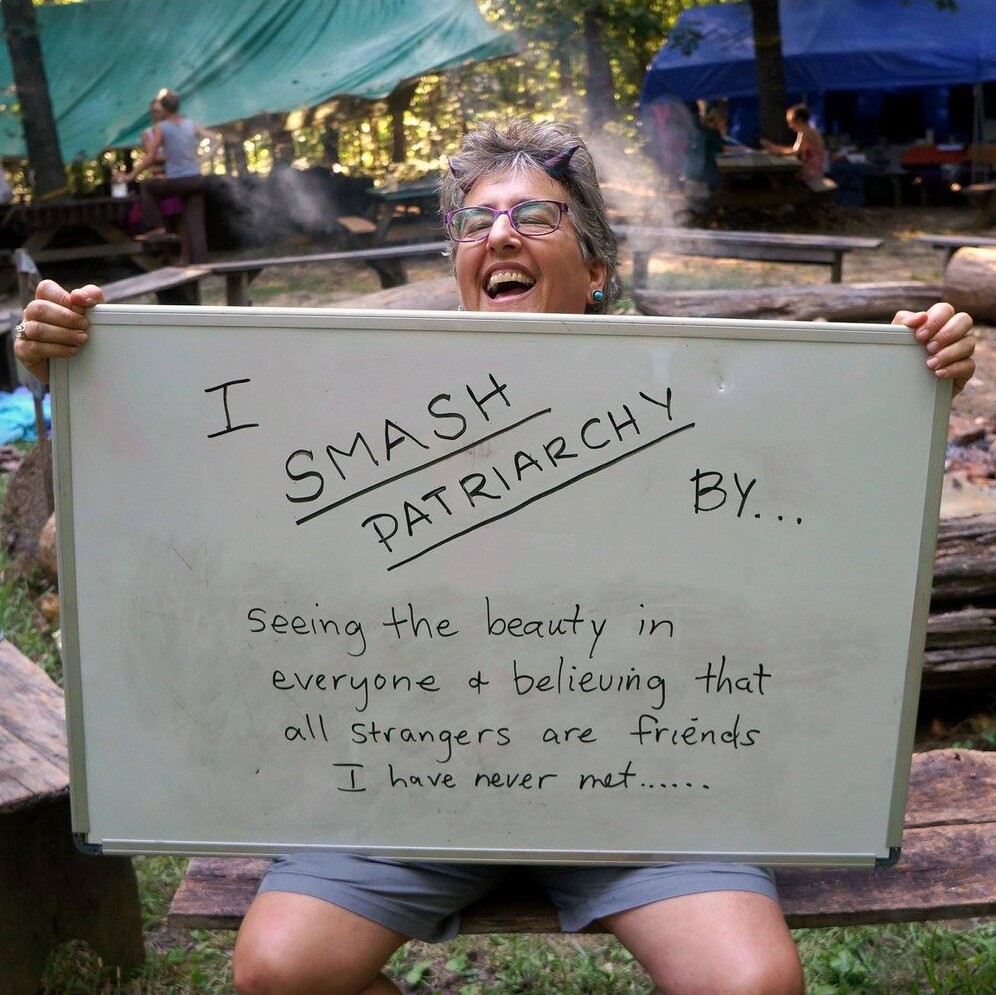 At Win Oaks Community, love is in the air!

But joining a close-knit group of adventurous souls can mix things up. “One tends to fall in love with the people who are here, despite your original preferences or orientation. So we have a surprising number of lesbians who start having romantic relationships with men here. People who thought they were poly find their true love only wants one partner and thus shift to being monogamous to make the relationship work,” cos (the unspecific pronoun in use in the community) explains.

For the blogger, the reason is obvious: “Twin Oaks is a very easy place to start a new romance, or even to just explore an attraction. […] Here we have all manner of opportunity to meet and fall in love with someone. The flexible work schedule is ideal for spending more time with someone who you are excited about being with. The constant influx of unusual people (and people looking for community are often thoughtful or exotic personalities) provides many distractions to the romantic imagination. Even if your existing relationship is satisfying, the commune’s parade of enchanting personalities will make most people seek at least new friendships if not new romances.” 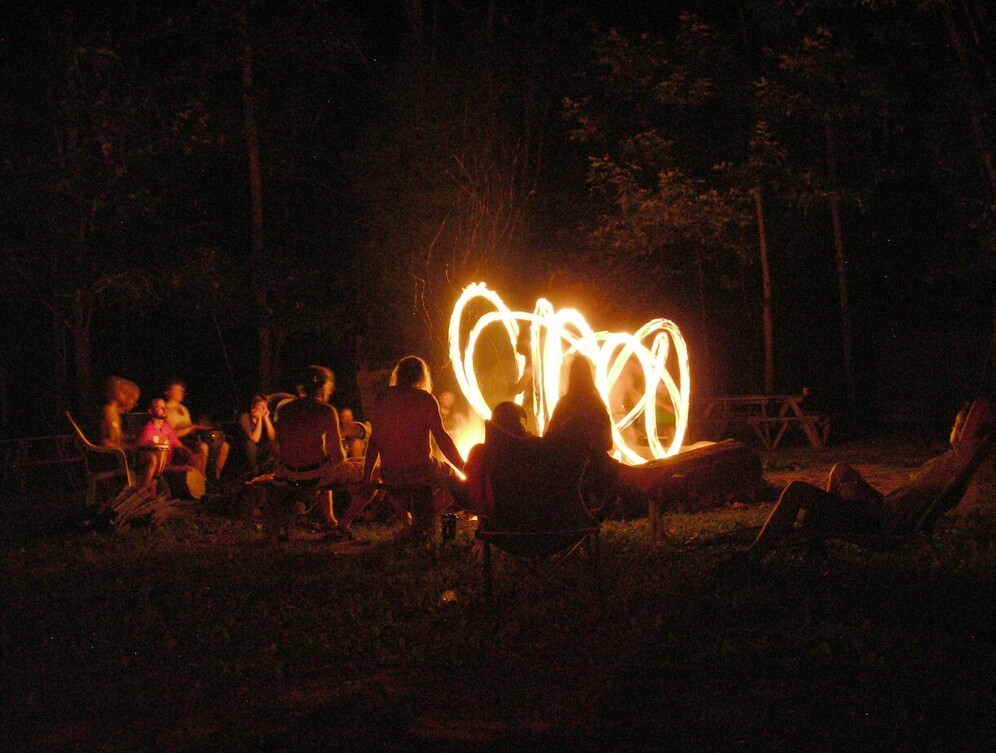 It turns out community living is the perfect setting for romance to blossom. © Twin Oaks Community

According to Paxus, the ones who suffer most from this state of flux are monogamous members whose partner decides to give polyamory a go. “Some combination of our enculturation and our reptilian brain makes jealousy often triumph over reason in these circumstances,” Paxus admits.

“This was one of the primary reasons I ended up not wanting to stay at T.O.” Leila responded to Paxus in the comments. “I always wanted to find someone and spend the rest of my life in a committed, monogamous relationship with that person,” the ex-member added. “It became pretty apparent that […] 40-50 year lifelong strictly monogamous relationships didn’t exist at T.O., and weren’t necessarily supported by the culture there. So I had to go. And I think that is ok,” she concluded.

It seems the main threat to communism is not economics, but the human heart.